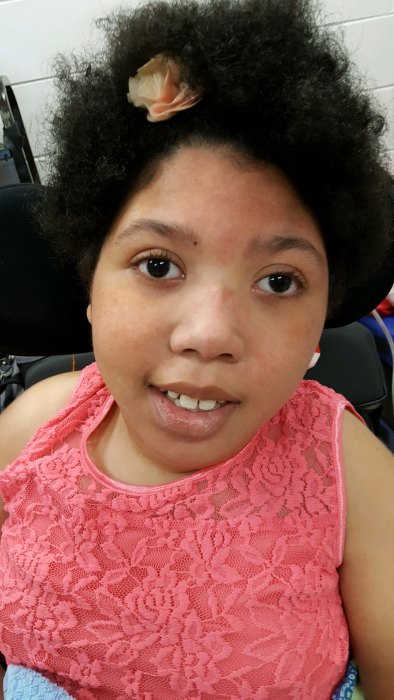 Athena Reneé Fuller passed away while surrounded by family on Sunday, August 5, 2018.

Athena was born on August 23, 2004 to Rachel (Zoë) Fuller. She was only given 2 weeks to live, but she fought and gave her family almost 14 years of her life on her own terms. Athena was a loving little girl whose captivating smile and bright brown eyes could make anything better. She had anyone who met her wrapped around her fingers, all while having no problem letting you know if something bothered her. She enjoyed butterflies, disco lights on her face, music, and most of all snuggling with her treasured sister, Ava. Athena was a brave and beautiful teenager who was fiercely loved by her family, and she will be missed immensely.

Athena's Celebration of Life will be held on Saturday August 25th at 10am, at the Friendship Hall building at Flat Rock Park.
6106 Warm Springs Rd, Columbus, GA 31909.

In lieu of flowers, the family is requesting donations for Athena's funeral and care fund at either of these 3 locations:

To leave a condolence, you can first sign into Facebook or fill out the below form with your name and email. [fbl_login_button redirect="https://vancebrooksfuneralhome.net/obituary/athena-rene%D0%B3-fuller/?modal=light-candle" hide_if_logged="" size="medium" type="login_with" show_face="true"]
×