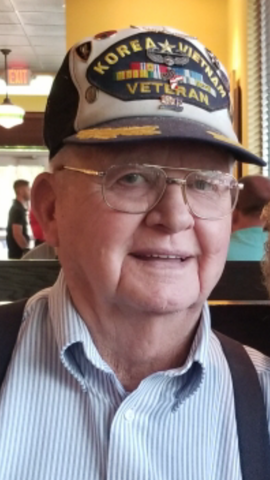 CW4 (Retired) Elmer Lee Garnett, 91, of Smiths Station, AL passed away Sunday, November 17, 2019 at St. Frances Hospital in Columbus, GA with his family by his side.

Funeral services will be held at 10 am CST / 11 am EST on Wednesday, November 20, 2019 at Vance Brooks Funeral Home in Phenix City with Rev. Jim Boone officiating.  Interment with full Military Honors will follow at 2 pm CST / 3 pm EST at Rose Hill Cemetery in Tallassee, AL.  The family will receive friends one hour prior to service at the funeral home in Phenix City Wednesday morning beginning at 9 am CST / 10 am EST.

Mr. Garnett was born July 30, 1928 in Tallassee, AL, son of the late John Garnett and Flora Mae Melton Trammell.  Mr. Garnett entered the United States Army in 1951.  As the 31st Dixie Division National Guard was called to active duty deploying to Korea, Elmer was among those leaving for deployment.  He spent the next 30 years in the Army and retired as a Chief Warrant 4 (CW4).  He then worked 16 years for the State of Georgia as a Correctional Officer serving the City of Columbus at the Columbus Diversion Center.  He enjoyed watching old reruns, MASH, In the Heat of the Night, and other favorite shows.  He loved playing Dominoes, and marble board games with his children, and all his grandchildren, this was special to him and brought much laughter.  Watching Fox News for many hours was a must and an everyday event.  Mr. Garnett was a member of Masonic Lodge in Tallassee, and a member of Mt. Zion United Methodist Church in Smiths Station.  He was known as a gentleman, and a man of great character.  Other than his parents, he was preceded in death by a son, Elmer Britt Garnett, three brothers, David Garnett, James Garnett, and Donald Garnett, four sisters, Irene Griggs, Inere Chase, Patricia Woodall, and Gaynelle McCoy, and two grandsons, Jeremy Dylan, and Joshua Parker.

To leave a condolence, you can first sign into Facebook or fill out the below form with your name and email. [fbl_login_button redirect="https://vancebrooksfuneralhome.net/obituary/cw4-retired-elmer-lee-garnett/?modal=light-candle" hide_if_logged="" size="medium" type="login_with" show_face="true"]
×