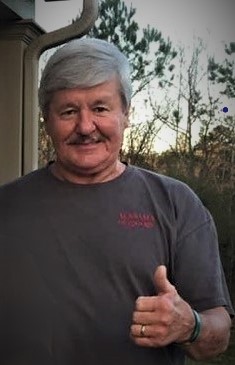 A private memorial service will be held at his home at a later date, according to Vance Brooks Funeral Home.

Mr. Wilson was born March 31, 1954 in Phenix City, AL, son of the late Woodrow “Skeet” Wilson and Mary Rose “Dolly” Wilson.  He attended Central High School, but graduated from Glenwood in 1972.  Mr. Wilson was a carpenter by trade.  Dana acquired the nickname “Fish” when he was young because of his love for fishing and hunting.  He was a master at telling stories and could make you laugh until your side hurt.  Mr. Wilson lived in the country in Bullock County, AL, surrounded by the woods and the wildlife he loved so much.  He loved to fish, hunt deer and turkeys, as well as an occasional wild hog.  Dana never met a stranger.  If you had the pleasure of knowing him, you laughed at a lot of his many outlandish “fish tales”.

Other than his parents, he was preceded in death by his wife, Patricia Norris Wilson.

Dana is survived by his daughters, Barbie Anna Rose Ballard and husband Jon of Newnan, GA and their two sons, Jaxson and Mason; Jessie Danielle Wilson of Nashville, TN; step-child, Bobbi Jo Haywood and husband Shaun and her two daughters, Lila and Tinley; a sister, Donna Worthy (Tommy) of Smiths Station, AL; a brother, Darrell Wilson (Mo) of Phenix City, AL; his ex-wife, Babbie Cornett (Jimmy), with whom he had a close and loving relationship; numerous cousins, nieces, nephews, friends,   and hunting buddies.

To leave a condolence, you can first sign into Facebook or fill out the below form with your name and email. [fbl_login_button redirect="https://vancebrooksfuneralhome.net/obituary/dana-patrick-wilson/?modal=light-candle" hide_if_logged="" size="medium" type="login_with" show_face="true"]
×