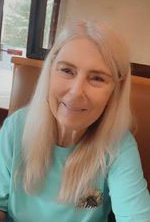 Diana was born on October 14, 1947 in Montague, MA to Edward Joseph Sokolowski and Winifred Eloise Sokolowski. She was employed for many years with AFLAC where she retired as a supervisor. Diana was an avid reader and enjoyed traveling. During football season, she was very devoted to cheering on the Atlanta Falcons and the Georgia Bulldogs, her two favorite teams. Diana will be greatly missed by her family and friends.

Survivors include her sons David Files (Amanda) of Cordele, GA and Jonathan Files of Columbus, GA; sisters Donna Barabas (John Henry) of Smiths, AL and Patricia Vandevender; granddaughters Sierra Files and Emily Files; and one great-grandson on the way, Braxton. Other than her parents, Diana is preceded in death by her brothers Edward Sokolowski, Jr. and Tony Sokolowski, and sister Joyce Sokolowski.

To leave a condolence, you can first sign into Facebook or fill out the below form with your name and email. [fbl_login_button redirect="https://vancebrooksfuneralhome.net/obituary/diana-elizabeth-files/?modal=light-candle" hide_if_logged="" size="medium" type="login_with" show_face="true"]
×