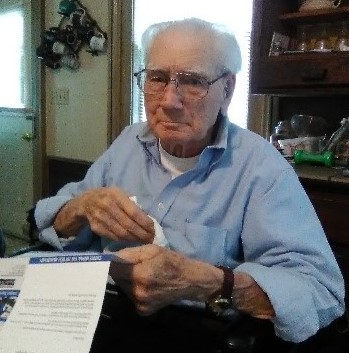 Dock B. Slaughter, 99, of Pittsview, AL died at Piedmont Midtown Hospital, Columbus, GA on Thursday, January 20, 2022 with his family by his side.
Mr. Slaughter was born November 28, 1922 in Columbus, GA son of the late Dock B. Slaughter, Sr. and Lela Richards Slaughter. Mr. Slaughter was also preceded in death by his wife of 77 years, Gloria Tillman Slaughter; his only son, Michael Scott Slaughter; a sister, Blanche Sholar Barnwell.
Survivors include his three granddaughters, Paige Bonner (Eric) and Shannon Edwards (Rob) both of Knoxville, TN and Emily Sanchez of Texas; daughter-in-law, Rita Slaughter; eight great-grandchildren and two great-great grandchildren; several nieces and nephews, Sandy Mullin (Larry), Joe Knowles (Polly), Pat Roper (Rick), Sam Tillman (Shari), Greg Glass and Matt Moss (Alisa); many friends.
Mr. Slaughter graduated from Jordan Vocational High School and also attended the University of Georgia (off campus) in Atlanta, GA and Columbus, GA. He was in the Civil Service and was the Director of Logistics at Ft. Benning. Mr. Slaughter retired after 30 years of committed service receiving numerous awards. He was also a WWII U. S. Army Veteran who was stationed in Italy. He was also one of the original members who established Kinetic Federal Credit Union in 1956. Dock served several terms filling the role of President, Vice President and Secretary of the Credit Union over the years.
Dock and Glo purchased an old historical house in Pittsview, AL and worked diligently to restore it to its original beauty. They became leaders in the community both locally and on a state level. Dock was also a volunteer firefighter with the Pittsview Volunteer Fire Department for over 40 years. He was also a member of the Pittsview Men’s Club.
A private Service of Remembrance will be held at a later date according to Vance Brooks Funeral Home, Phenix City, AL.

To leave a condolence, you can first sign into Facebook or fill out the below form with your name and email. [fbl_login_button redirect="https://vancebrooksfuneralhome.net/obituary/dock-boswell-slaughter/?modal=light-candle" hide_if_logged="" size="medium" type="login_with" show_face="true"]
×