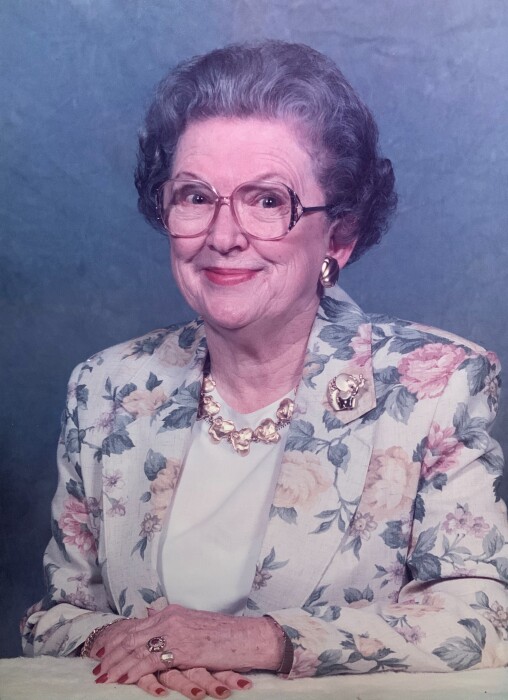 Elma Jean Fleming, age 98, resident of Phenix City, AL, passed away on Sunday, May 17, 2020 at Azalea Trace Nursing Facility in Columbus, GA.  A memorial service will be held at Vance Brooks Funeral Home in Phenix City, AL at a date to be announced.

Mrs. Jean Fleming, daughter of the late James Ewell Knight and Ida Lou Commander Knight, was born on July 26th, 1921 in Coffee County, AL.  Mrs. Fleming spent the beginning of her life growing up with her sister, Hilda on her parents’ farm near Enterprise, AL.  Mrs. Fleming excelled in school, and upon graduating from high school, she was offered a scholarship from Huntingdon College for her talents in the artistry of penmanship.  She chose to attend secretarial school in Atlanta, GA, where she enjoyed living with her beloved Aunt Cleone Pless and her family.

After graduating from secretarial school, Mrs. Fleming returned to Enterprise, AL and married her long-time sweetheart Mr. Henry Daniel Fleming.  Henry soon joined the Army Air Core at the start of World War II and began traveling from one posting to the another within the US.  Mrs. Fleming traveled the country with her husband until he was transferred overseas to England.  At this time Mrs. Fleming returned to Enterprise, AL and began her work as a Social Worker with the American Red Cross, in support of the war effort.

Mrs. Fleming had great pride in her husband returning from WWII as a decorated war hero who earned a Purple Heart and Oak Leaf Cluster.  After his return, Mr. and Mrs. Fleming moved to Tuscaloosa, AL where he attended and graduated from the University of Alabama.  Mr. and Mrs. Fleming, along with their daughter Danelle, then settled in Phenix City, AL, where they worked together to create the Diversified Occupation Program at Central Highschool.  Once her daughter began school, Mrs. Fleming returned to the work she loved at the American Red Cross, where she worked until her retirement.

Once retired, Mrs. Fleming put her time and devotion into working with her church, Summerville Methodist Church.  She also worked with The Henry Fleming Scholarship Foundation, established in her husband’s honor by The Phenix City Advisory Council on Career Tech Education to encourage students who have completed a career technical course to continue their education and assisting them with funds for post-secondary education.  In addition to these activities, Mrs. Fleming devoted herself to her family and friends.  She showed care and attention to everyone she loved in her life through the hundreds of cards, letters, and care packages she sent in the mail, the thousands of miles she traveled visiting her loved ones, and the countless hours she spent in conversation over the telephone and in person.

Mrs. Jean Fleming had a strong faith in God, great passion for helping others, and she loved making other people feel happy, loved, and cared about.  She was artistic and creative, which showed through her beautifully inventive home décor, her elegant fashion sense, her graceful penmanship, and more.  She loved to have fun watching Alabama Football games and collecting “Alabama Elephants” which she proudly displayed in her “Alabama Room.”  She greatly enjoyed opening her home to others by hosting parties, get-togethers with close friends, and meetings of the United Methodist Women.  She was a talented cook, an excellent storyteller and entertainer, and she loved to laugh and make others laugh.  Mrs. Jean Fleming was a classy woman who made friends everywhere she went.

Besides her parents, Mrs. Fleming was proceeded in death by her husband, Henry Daniel Fleming, and her sister, Hilda Cumrine.  Mrs. Fleming is survived by her daughter, Virginia Danelle Fleming of New Orleans, LA; her granddaughter, Jessica Fleming Mehrtens, also of New Orleans, Louisiana; as well as other beloved family members and friends.

To leave a condolence, you can first sign into Facebook or fill out the below form with your name and email. [fbl_login_button redirect="https://vancebrooksfuneralhome.net/obituary/elma-jean-fleming/?modal=light-candle" hide_if_logged="" size="medium" type="login_with" show_face="true"]
×