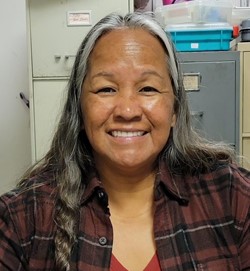 Eva Marie Taijeron White, age 60, resident of Valley, Alabama, passed away on Thursday, November 18, 2021 at her residence. Memorial services will be held at the Chapel of Vance Brooks Funeral Home, 3738 US Hwy 431N/280W, Phenix City, Alabama on Tuesday, November 23, 2021, 3 p.m. with Reverend Jimbo Albrecht officiating. The family will receive friends after the service on Tuesday, November 23,2021 until 5 p.m.
Mrs. White, daughter of Doris Elizabeth Knowles White and the late Eduardo L.G. White, was born February 15,1961 in Agana, Guam. She was working at Central Pump and Compressor where she faithfully worked as Office Manager for several years. Mrs. White was Catholic by faith and an avid Alabama Crimson Tide football fan. She enjoyed gathering with family at her home where she would cook meals, particularly known for her famous fried rice pans. Mrs. White enjoyed spending time with her husband upgrading their home. She was a lady who loved being with her family, especially those occasions where she could watch Madison play softball. Mrs. White enjoyed going with her husband to car shows. She also enjoyed her quite time of solving puzzles and playing games on her cell phone. The family remembers her as a tough and proud lady…a lady who was proud of her origin country of Guam, but most of all they remember her as a lady who was always devoted to her family.
Besides her father, she was preceded in death by three brothers, Michael Taijeron, Patrick Taijeron, and Johnny Taijeron; and grandson, Cason Bryant.
She is survived by her husband, Mike Miles of Valley, Alabama; mother, Doris McGinnis of Fairmount, Georgia; one daughter, Lisa Worthy and her husband Danny of Phenix City, Alabama; two sons, Ray Bryant and Lori of Phenix City and Anthony Bryant, also from Phenix City; four sisters, Lisa Ana Thomas of Ranger, Georgia, Frances White of Las Vegas, Nevada, Doris D. Wright of Fort Wayne, Indiana, and Esther Morisheta of Savannah, Georgia; three brothers, Eduardo “Bo” White and his wife Michelle of Fairmount, Georgia, Anthony Taijeron and his wife Judy of Guam, and Eugene Taijeron, also of Guam; four grandchildren, Madison Bryant of Valley, Hannah Waters of Columbus, Georgia, Caiden Waters of Phenix City, and Adalynn Bryant, also of Phenix City; several nieces; nephews; other relatives and friends.

To leave a condolence, you can first sign into Facebook or fill out the below form with your name and email. [fbl_login_button redirect="https://vancebrooksfuneralhome.net/obituary/eva-white/?modal=light-candle" hide_if_logged="" size="medium" type="login_with" show_face="true"]
×