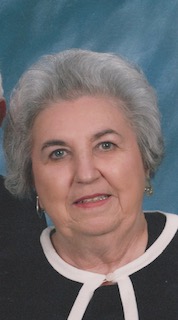 Funeral services will be held 11:00 EST Friday, December 28 at Vance Brooks Funeral Home in Phenix City with the Reverend Joe Lisenby of Greenville, AL officiating. Visitation will be one hour prior to services. Interment will follow at Lakeview Memorial Gardens near the chapel. Foreman Brown-Service Funeral Home of Andalusia and Vance Memorial Chapel will be making the arrangements.

Mrs. Bryan, daughter of the late Fred and Edith Bullen, was born April 26, 1934 on a farm in north Mississippi, a short distance from the Alabama line. She graduated from Red Bay High School in 1952 where she was an honor student and cheerleader. During high school, she won a State Garden Clubs of Alabama contest by writing a Prayer for Peace for which she was awarded the Key to the City of Red Bay, Alabama.  Upon graduating high school, Frances attended the University of Alabama where she studied Home Economics.

After graduating from the University of Alabama in 1956, Frances was employed by Alabama Power Company in Eufaula, Alabama as a home economist.  This is where she met her future husband Lawrence Lee Bryan who was a pharmacist in town.  They were married in Red Bay in 1958.

As newlyweds they moved to Phenix City, Alabama where her husband opened Sherwood Pharmacy, a community independent store for more than 30 years. During her time in Phenix City, Frances worked as a home economist for Alabama Power Company.  She and her husband were blessed with two daughters Nancy and Mary Frances.  Frances then stayed in the home and raised her family. She was very active in her community.  She was a member of Summerville United Methodist Church where she taught Sunday school, was a member of the UMW and sang in the choir for 50 years.  Frances was also an accomplished cook and member of the Thursday Bridge Club. Although outnumbered by her family of Auburn graduates, she remained loyal to the Crimson Tide to the very end.

Memorials may be given to Comfort Care Hospice of Andalusia.

To leave a condolence, you can first sign into Facebook or fill out the below form with your name and email. [fbl_login_button redirect="https://vancebrooksfuneralhome.net/obituary/frances-bullen-bryan/?modal=light-candle" hide_if_logged="" size="medium" type="login_with" show_face="true"]
×