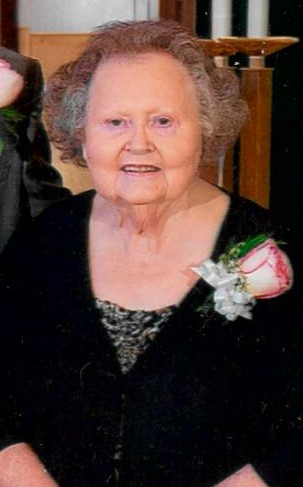 Grace June Wade Chapman, 87, of Phenix City, AL died Wednesday, November 03, 2021 while at Phenix City Health Care.
Funeral Services will be held 12:30 PM (EST) on Monday, November 08, 2021 in the Chapel of Vance Brooks Funeral Home, Phenix City, AL with Rev. Grant Parker officiating. Interment will follow in Ft. Mitchell National Cemetery. The family will receive friends one hour prior to the service on Monday at the funeral home.
Mrs. Chapman was born June 7, 1934 in Ft. Mitchell, AL daughter of the late Thomas Milford Wade, Sr. and Fannie Ola Kite Wade. She was a long-time member of Grace Baptist Church where she was the Jr. Dept. Secretary for many years. In her later years she often worshiped at Epworth United Methodist Church. Mrs. Chapman was a homemaker who enjoyed cooking and caring for her husband and family. The grandchildren were the apple of her eye though. The memories of her love, care and gentle spirit will continue to comfort us. Though she is no longer here in our daily routine, she is still in our hearts.
Mrs. Chapman was preceded in death by her parents and husband, Wylie P. Chapman, Jr.
Survivors include her son, Richard Alan Chapman, (Michelle), Bonaire, GA and daughter, Deborah Faye Connell, (Billy), Phenix City, AL; one sister, Hilda Fay Bozzelli and one brother, Thomas Milford Wade, Jr. (Jane), all of Phenix City, AL; seven grandchildren, Lindsey Connell, Kim Giles, Rockne Hammer (Angela), Mitchell Chapman (Melissa), Sarah Chapman, Ashley Atkins (John) and Mackenzie McCorkle; nine great-grandchildren and one great-great grandchild; several nieces, nephews and friends.
Flowers will be accepted or the family requests donations be made in her memory to either Columbus Hospice, www.columbushospice.com or the Parkinson Foundation, www.parkinson.org.

To leave a condolence, you can first sign into Facebook or fill out the below form with your name and email. [fbl_login_button redirect="https://vancebrooksfuneralhome.net/obituary/grace-june-chapman/?modal=light-candle" hide_if_logged="" size="medium" type="login_with" show_face="true"]
×