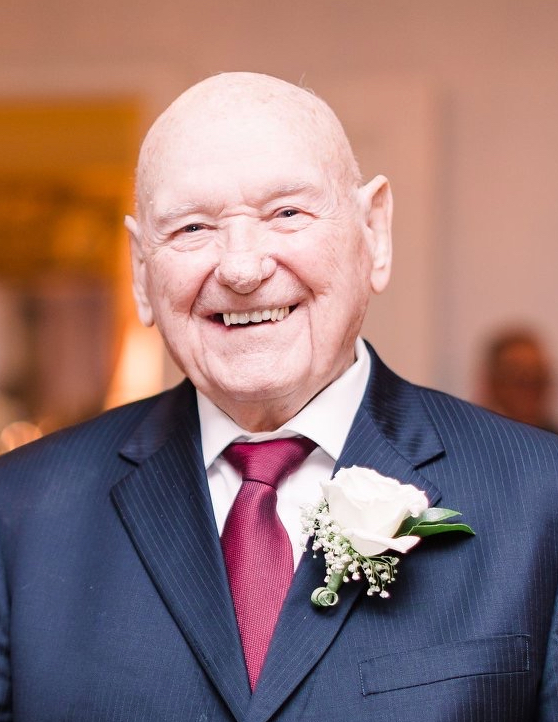 U. S. Navy Honors at Graveside

Mr. Jack Sanders, 96, of Opelika, Alabama, passed away peacefully at his residence Friday, March 4, 2022, while surrounded by his loving family.

Jack Roland Sanders was born September 3, 1925 in Phenix City, AL to William and Mildred Sanders. He was preceded in death by his parents; a son, Lindsey Sanders; a grandson, Bradford Sanders; and his five brothers: William, Walter, John, Joseph, and Oliver Sanders.

Jack’s professional career was in civil service at Fort Benning, GA from September 1948 – December 1981. He was originally employed as a Clerk-typist and retired as an Auditor, the Assistant Chief of the division.

Jack was an active member of his church and community, holding various offices and commitments for over seventy years. He served in the capacity of Sunday School Director, teacher, and secretary; he was also a treasurer, Director of Music, and Church Training Director. After more than 62 years as a church deacon, he was named Deacon Emeritus at Summerville Baptist Church in 2016. He also served on the executive committee for the Russell Baptist Association. In service to the Free and Accepted Masons, he participated as the Worshipful Master and secretary.

Jack was a firm believer in and supporter of education, serving in various capacities such as PTA President, trustee, and president of a local school board for multiple terms. He was instrumental in the creation of Glenwood School and served on the inaugural Board of Trustees. In addition, he served numerous years as District Director of the Alabama Association of School Boards. Jack also served on the Federal Relations Network Team of the National School Boards Association, traveling to Washington, DC yearly to present educational concerns to senators and representatives.

In the community, Jack served on the Council for the Area Agency on Aging, Russell County Task Force for Senior Citizens, and was on the Board for the Opelika Achievement Center. He was a former member of the Retirement Board for the Phenix City/Russell County Chamber of Commerce. Until March 2020, he was an integral member of the Emergency Food Assistance Program in both administrative and field capacities. He was District Leader for the State Federation, the National Association of Retired Federal Employees. He was an active member of the American Legion.

As a family, we reviewed his personal documents and uncovered numerous forms of recognition honoring his commitment and dedication to church and community. These included certificates, plaques, trophies, and other memorabilia. There are simply too many to list, but he was particularly fond of a lapel pin with this inscription: “Senior Citizens Hall of Fame * State of Alabama * Golden Eagles * Honorary Eagle.”

While Jack Sanders invested much of his life to church and community, his devotion to family never wavered. In fact, we believe he was happiest when surrounded by those he loved. He listened intently, loved unconditionally, and never failed to offer advice or support. The fabric of his life was woven with the threads of love for God, family, and country.

Jack Sanders would want each of us to contemplate God’s purpose for our lives. He would encourage us to strive for eternal significance with values of self-discipline, sense of duty, and uncompromising morality. Someone recently told the family that Jack had lived his whole life in preparation for March 4, 2022. On that day, we believe, as Matthew 25:21 teaches us, that God welcomed Jack Sanders home with these words: “Well done, thy good and faithful servant.”

In lieu of flowers, the family requests those who wish to express sympathy to consider making a donation to Shiloh Baptist Church; 5125 US HWY 80; Opelika, AL 36804 or the Joyful Learners and/or Music Programs at Summerville Baptist Church; 3500 Summerville Road; Phenix City, AL 36867.

To leave a condolence, you can first sign into Facebook or fill out the below form with your name and email. [fbl_login_button redirect="https://vancebrooksfuneralhome.net/obituary/jack-roland-sanders/?modal=light-candle" hide_if_logged="" size="medium" type="login_with" show_face="true"]
×

U. S. Navy Honors at Graveside