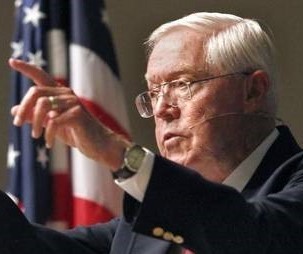 With deep sadness, the family of Jack Brinkley announces his death.

A graduate and champion debater from Young Harris College, he served in the United States Air Force during the Korean era.  He was on combat crew training as a pilot at Fort Benning’s Lawson field with orders to go to Korea, but the war ended.  “They heard his squadron was coming,” Sallye said with a twinkle in her eye, “and decided to end the hostilities.”  He later became an instructor pilot in the C-119 flying boxcar.

He then attended the University of Georgia Law School and entered the practice of law in Columbus with the firm of Young, Hollis, and Mosely, and later with Coffin and Brinkley.  He was admitted to the District of Columbia bar and the Supreme Court of the United States Bar.

He served in the General Assembly of Georgia for two one year terms, due to reapportionment, where he was Chairman of the Local Affairs Committee.   He was the author of the phenylketonuria (PKU) bill requiring testing for new born infants.  Later, with the Cantrells of Columbus, he resisted the effort to close down the Warm Springs Institute, and sponsored funding legislation during his years of public service.

In 1966 he was elected to Congress from the 3rd District of Georgia at age 35, and served for eight terms, retiring from the 97th Congress in 1983.  During his last term before retirement he was Chairman of the Military Construction Subcommittee.

That subcommittee had jurisdiction over military acquisitions and disposals, and as such blocked the transfer of land at Fort Gillam chosen for the Region IV Veteran’s cemetery.  Subsequently, under his leadership, the Fort Mitchell VA cemetery was approved by the Reagan Administration.

Brinkley was the author of legislation designating Andersonville as a National Historic Site, transferring it from the Department of the Army to the Department of Interior.  He served as Co-Chairman with Hon. Rudy Hayes of Americus in placing the Georgia Memorial at the site.

During the last terms of his service, there was intense competition for the location of an army plan for One Station Unit Training (OSUT) where, for cost savings, basic infantry training was to be combined with advanced infantry training.  The New England Mid-West coalition for Fort Drum and the Strom Thurmond effort for Fort Jackson, effectively blocked the army’s choice of Fort Benning, initially.  The log jam was broken upon Brinkley’s move to subcommittee chairman of the Military Construction Committee and the subsequent authorization of the RECEPTION STATION at Sand Hill at Fort Benning.

Constituent service was important to Brinkley and his staff in Washington and in the District, and he was known for coming down hard and with persistence for citizens faced with the sometimes heavy hand of bureaucracy.  He placed emphasis on attendance and seldom missed a vote or quorum call.

He was a CIVITAN for 50 years, a Master Mason for 50 years, an attorney for 50 years, a Christian for all of his life, baptized at Betts’ Mill Pond when he was almost ten years old, and practiced the requirements of Micah to do justly, love mercy and walk humbly with thy God. He faithfully took his family to Edgewood Baptist Church and taught Sunday School there for many years, then served the Lord at Evangel Temple until his death.

He was preceded in death by his late wife, dearly beloved Lois Kite Brinkley and their oldest son Jack Jr. He is survived by his dearly beloved wife Sally Posey Brinkley, his youngest son Fred, wife Trish and their children and grandchildren; beloved daughter-in-law Stacy Brinkley and Jack Jr.’s children and grandchildren.  One of the marks of this fine man’s life is that he had the love and admiration of three generations of offspring, as a result of his Godly character demonstrated to two loving families.

He will be buried in a private family ceremony in the Oswichee Baptist and Alexandria Methodist Cemetery in Fort Mitchell, Alabama, in the Kite plot beside his late wife.  He will be remembered for his campaign promise, “To remember who I am, where I’m from, and who sent me.”  He kept his promise.

To leave a condolence, you can first sign into Facebook or fill out the below form with your name and email. [fbl_login_button redirect="https://vancebrooksfuneralhome.net/obituary/jack-thomas-brinkley-sr/?modal=light-candle" hide_if_logged="" size="medium" type="login_with" show_face="true"]
×