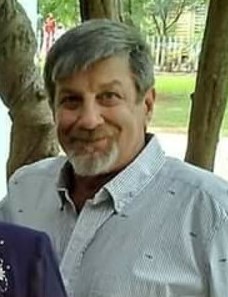 James Bradley “Brad” Leaman, 56, of Columbus, GA died at Columbus Hospice House, Columbus, GA on August 10,2021, with family near his side.
Funeral Services will be held at 2:00 PM (EST) on Saturday, August 14,2021, in the Chapel of Vance Brooks Funeral Home, Phenix City, AL with Rev. Boyd Cochran officiating. Interment will follow in Lakeview Memory Gardens. The family will receive friends one hour prior to the service at the funeral home.
Mr. Leaman was born March 25, 1965, in Ft. Dix, NJ son of Ernest Leaman and Martha Ann Culpepper Leaman. He was an installer for Huckaby Brothers Flooring for many years. Brad and his brothers had a passion for playing the guitar, playing at every opportunity. He at one time had a small band that played locally. Brad was a jokester, often pulling pranks on family and the neighborhood. Halloween being his favorite time as he would dress up and “scare” people as they walked by the house. Brad was also a comedian. He had the ability to turn almost any situation into a comedy with his wit and humor. Above all else, he loved his family. We will miss him and his silly ways, but the fun times will often be rehearsed as our family gathers for family time.
Mr. Leaman was preceded in death by his paternal grandparents, James and Margaret Leaman, maternal grandparents John Culpepper (Willie) and Lois M. Williams; two uncles, John and James Leaman.
Survivors include his parents, Ernest Leaman and Martha Ann Culpepper Leaman, Phenix City, AL; two daughters, Brandee Leaman (Kelcie) and Julee Leaman both of Columbus, GA; sister, Theresa Meroney (Mike), Jasper, GA; two brothers, Jeffrey “Jeff” Leaman (Rena), Phenix City, AL and Richard “Ricky” Leaman, Brent, AL; three aunts, Brenda Royal (Dan), Elaine Walsh and Tammy Leaman; five nieces Jennifer, Summer and Heather (Andrew), Danita (Stephen), and Elizabeth (Matt); three nephews, Eric, James (Jami Jo) and John.; seven great nieces, Isabella, Rosalia, Tatum, Kensley, Katelyn, Braylin and Analeigh; five great nephews, Bryson, Dalton, Aiden, Austin and Braxton; several other family members and friends.
Flowers will be accepted, or donations may be made in his memory to Columbus Hospice, www.columbushospice.com.

To leave a condolence, you can first sign into Facebook or fill out the below form with your name and email. [fbl_login_button redirect="https://vancebrooksfuneralhome.net/obituary/james-bradley-brad-leaman/?modal=light-candle" hide_if_logged="" size="medium" type="login_with" show_face="true"]
×