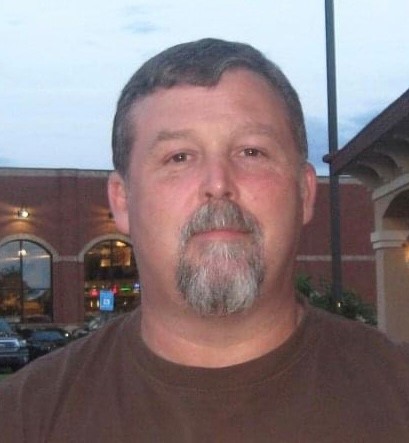 Mike was born in Columbus, Georgia to Michael Bruce Boyette and Nancy Spivey Boyette Freeman.  Married to his high-school sweetheart, Jill Sims Boyette since 1980, they would have celebrated 43 years of marriage on January 1, 2023.

Mike was a member of the Central High School class of 1979 and very much enjoyed his role as a fullback on the Varsity Football Team. Jill and his parents enjoyed seeing him featured in the local newspaper articles on several occasions.

He joined the Navy in 1984 working in electronics.  Later, he worked as an electrical technician at PolyChrome.

He was well-known and respected in the regional music scene as an accomplished guitarist and recording engineer. A joyful achievement for him was building his own guitar from start to finish and it is displayed as a work of art in the family home.  Possessing a sharp, inquisitive mind, Mike was never content to simply accept surface knowledge, but always researched any subject to learn all he could. This attribute was very much displayed in his love and knowledge for God’s Word.  A deep thinker, he relished engaging in deep conversation on a variety of subjects, none more interesting than sharing his quest for understanding and sharing of the Bible.

Throughout the last several years, it was important to Mike’s heart to be as involved as possible in various ministries.  Those efforts included leading praise and worship at West Central Georgia Hospital, Valley Rescue Mission, Celebrate Recovery, and churches throughout the community.

Mike is survived by his beloved wife, Jill; daughters Hannah Boyette, Rachel (Josh) Elvington, and Elisabeth (Mikey) Proia.  PeePaw to his grandchildren Tony, Mel, Elly, Abi, Trey, James, Ian, and another grandson due in March.  He is also survived by his mother, Nancy Freeman, and brothers Mark (Sherry) Boyette, and Billy (Robin) Freeman, as well as numerous extended relatives including nieces and nephews.

He was preceded in death by his father, Mike Boyette; stepmother, Ann Boyette; and stepfather, Jerry Freeman.

Mike’s family was incredibly important to him, and he enjoyed spending quality time with them.  He was a beloved husband, father, PeePaw, son, brother, uncle, and friend. Mike never wanted to be away from his wife, the love of his life.  He will be deeply missed.

Visitation is Thursday, December 22, 2022, from 6:00-8:00pm EST.  Services will be held Friday, December 23 at 11:00am EST. Both at Vance Brooks Funeral Home in Phenix City.  He will be interred at Fort Mitchell National Cemetery at a later date.

To leave a condolence, you can first sign into Facebook or fill out the below form with your name and email. [fbl_login_button redirect="https://vancebrooksfuneralhome.net/obituary/james-michael-mike-boyette/?modal=light-candle" hide_if_logged="" size="medium" type="login_with" show_face="true"]
×