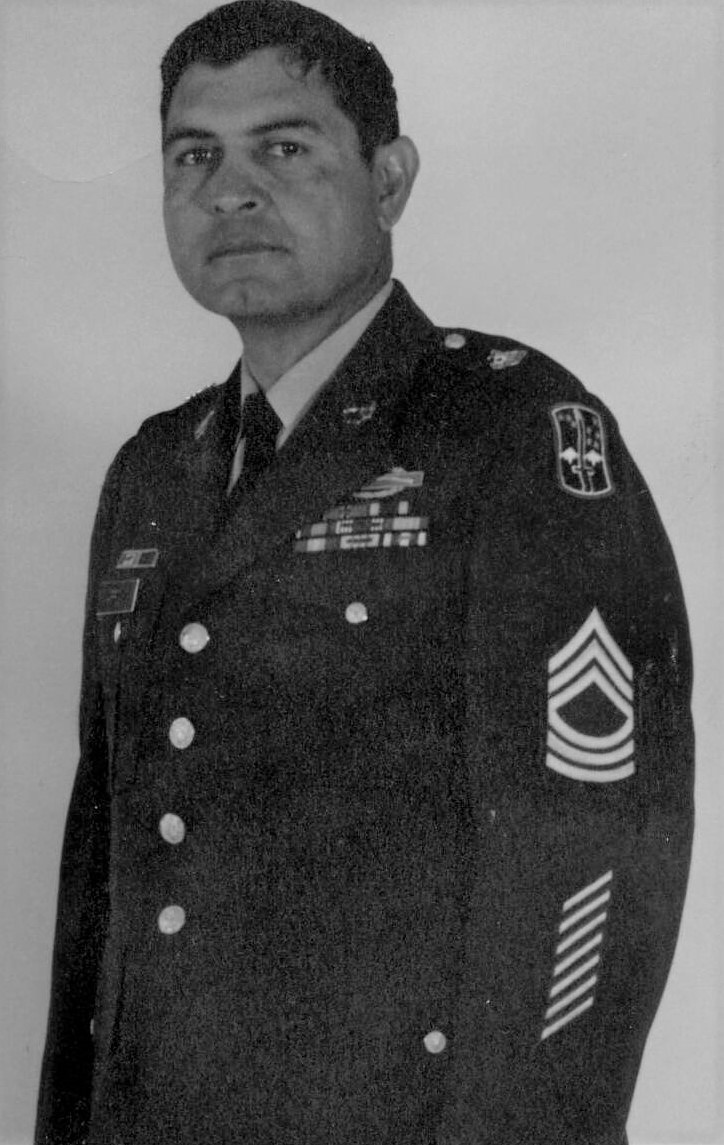 Jesse Arroyo, 91, of Salem, AL died at Piedmont Midtown, Columbus, GA on Tuesday, August 09, 2022.
A Graveside Service with U. S. Army honors will be held at 1:30 PM (EST) on Tuesday, August 16, 2022 at Ft. Mitchell National Cemetery with Rev. Mike McBride officiating according to Vance Brooks Funeral Home, Phenix City, AL. The family will receive friends from 6:00 till 8:00 PM (EST) on Monday evening at the funeral home.
1st SGT (Ret) Arroyo was born January 23, 1931 in Henrietta, TX son of the late Alfonzo Arroyo and Julia Garcia Arroyo. He had retired from the U. S. Army after over 20 years of service to our country, to include multiple tours in Vietnam. He was a member of the American Legion Post # 135 and the DAV. He was also a member of Trinity Temple where he worshiped with family and friends. He had a passion for music and often shared this talent with the community. His band, Bobby Ellis and the Country Gospel Band played at various local venues and at nursing homes. First and foremost, he was a patriot. His love of country will continue to inspire us and future generations to come. Thank you for your service.
Mr. Arroyo was preceded in death by his parents, Alfonzo and Julia Arroyo and four siblings, Sam Arroyo, Magil Arroyo, Joe Arroyo and Carmen Arroyo Peters; a son, Daryl Arroyo and step-son, Michael Jinright
Survivors include his wife of 28 years, Sarah Ann Graham Arroyo, Salem, AL; one daughter, Cheryl Arroyo Franklin (Tim), Phenix City, AL; a daughter-in-law, Malissa Arroyo, Midland, GA; seven grandchildren, Angelina Waters (Jake), Erika Arroyo (Taylor Struck), D. J. Arroyo (Lindsay), Iliza Arroyo, Jonathan Murphy, Cameron Franklin (Kayla) and Tyler Franklin (Madison). Great-grandchildren, Maverick Waters and Turner Franklin. Stepdaughters, Marie Brown (Michael) and Lisa Warren (Stan). Step granddaughter, Ashely Maroney (Heath); Step great grandchildren, Holleigh Meroney and Hayden Meroney; several nieces, nephews, and friends.
In lieu of flowers the family requests donations be made in his honor to, St. Jude Children’s Hospital, www.stjude.org.

To leave a condolence, you can first sign into Facebook or fill out the below form with your name and email. [fbl_login_button redirect="https://vancebrooksfuneralhome.net/obituary/jesse-arroyo/?modal=light-candle" hide_if_logged="" size="medium" type="login_with" show_face="true"]
×