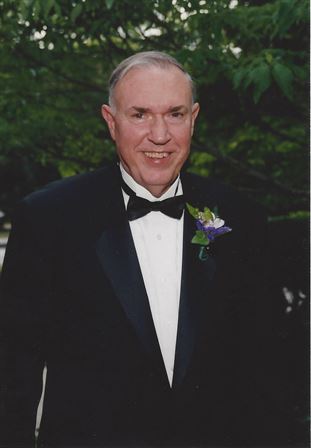 John Alfred Johnson, beloved father, husband, and friend, entered eternal life on January 1st, 2019 at his home in Conyers, Georgia. He was 79 years old.
John was born October 27th, 1939 in Columbus, Georgia. He was the first child of Bessie Strickland and John Wesley Johnson. After playing basketball at Phenix CityпїЅs Central High School he earned a full athletic scholarship to the University of Georgia where he was a starting center for the basketball team and set records that held for many years. After graduating with a degree in Accounting, he worked as a Certified Public Accountant in Phenix City and later in Atlanta, before building a successful Atlanta accounting practice, J.A. Johnson and Company, PC. Despite his retirement in 2009, the business continues to operate and serve its clients in Conyers, GA. He was actively involved in his community and church, and lived a life dedicated to family and sharing his faith and love with others through spontaneous song, genuine laughter, and big-hearted smiles. He had an infectious love of life that will be remembered and treasured by all who knew him.
He is survived by his wife of over 50 years, Gloria Tidmore Johnson, their four children, Jonathan Johnson, an Atlanta attorney, Joel Johnson, a professor in electrical engineering at Ohio State University, Maria Johnson, an Atlanta psychiatrist and Kimberly Walker, an accountant in Greenville, SC; brother, Phillip Johnson of Columbus, GA; as well as eight grandchildren.
Two services will be held. On Friday, January 4th, there will be a 4 PM visitation and 5 PM funeral service at Conyers First United Methodist Church. On Saturday, January 5th at Trinity United Methodist Church of Phenix City, AL there will be a 12:30 PM Lunch, 2 PM visitation and 3 PM funeral service, with burial following at Lakeview Memory Gardens.
Condolences may be submitted on-line at www.scotward.com. Scot Ward Funeral Services, 699 American Legion Road, Conyers, GA 30012, 770-483-7216.

To leave a condolence, you can first sign into Facebook or fill out the below form with your name and email. [fbl_login_button redirect="https://vancebrooksfuneralhome.net/obituary/john-alfred-johnson/?modal=light-candle" hide_if_logged="" size="medium" type="login_with" show_face="true"]
×