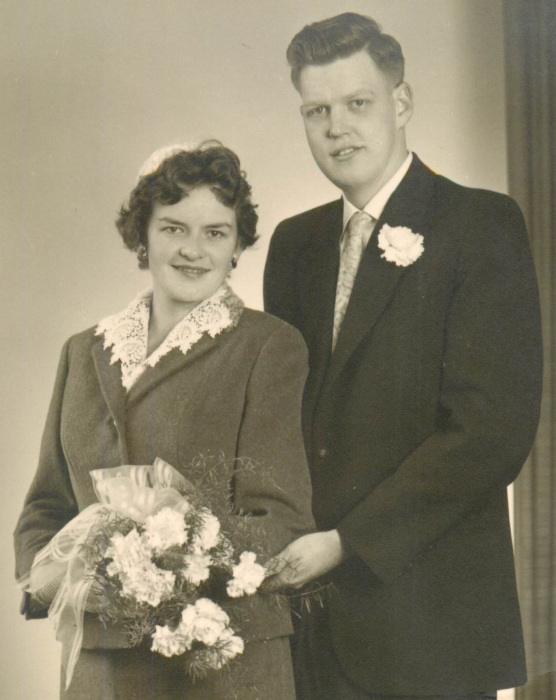 Katie was born January 26, 1935 in Unterleinleiter, Germany.  She was the daughter of George and Kunnigunda Dorsch.  She is preceded in death by her husband, Russell William Johnson and her eldest son, Bruce Allen Johnson.

Katie met her wonderful husband on New Year’s Eve in 1956.  After getting married, she left Germany for the United States and learned a new language and culture.  She loved the military life and always made a home wherever they were stationed.  Together, she and her husband built a life full of laughter and love through hard work and determination.  Katie retired from Greyhound Support Service Culinary Union in 1978.  She spent the last 39 years as a homemaker.  She loved being in the yard and was known for her gardening skills.  Her home was often times referred to as a miniature Callaway Gardens.  Over the years, she planted thousands of flower bulbs which formed a colorful carpet when they bloomed.  She enjoyed her piece of paradise every day.

She is survived by two children:  Cindy Hofstetter and her husband, Eddie and James Johnson and his wife, Kelly, and a daughter-in-law, Irene Johnson.  She leaves behind seven grandchildren:  Lydia and Russell Hofstetter, Ethan, Seth and Matthew Johnson, and Jacob and Joshua Johnson; and one great-granddaughter, Aubrie Rae Johnson.  She is also survived by her brother, Fritz and his wife Erica as well as her brother-in-law, Heinz.

In lieu of flowers, contributions may be made as an honorarium to the Columbus Hospice House, 7020 Moon Road, Columbus, GA 31909.

To leave a condolence, you can first sign into Facebook or fill out the below form with your name and email. [fbl_login_button redirect="https://vancebrooksfuneralhome.net/obituary/katharina-katie-johnson/?modal=light-candle" hide_if_logged="" size="medium" type="login_with" show_face="true"]
×