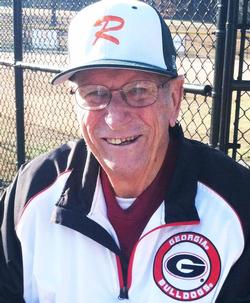 Loy Sinquefield, 79, Columbus, GA, passed away on Tuesday, July 8, 2014. A funeral service will be held Saturday, July 12, 2014 beginning at 11:00 A.M. EST at Britt David Baptist Church, 2801 West Britt David Road, Columbus, GA. Dr. Tim Jones and Reverend Clark Standard will be officiating. Visitation will be held Friday, July 11, 2014 from 5:00 until 8:00 P.M. at Vance-Brooks Funeral Home, 4048 Macon Road, Columbus, GA. Serving as pallbearers will be; Alan Sinquefield, Aaron Wilson, Nathan Sinquefield, Corey Ramirez, C.J. Ramirez, Will Marth and Hunter Robbins. Loy was born October 1, 1934 in Randolph County, GA, son of the late Truman and Myrtie Sinquefield. He retired from Norfolk Southern Railway as District Sales Manager after forty one years of service. Loy then worked for Bill Heard Chevrolet for approximately fourteen years. Loy was an active member of Britt David Baptist Church, where he served as deacon and in many other leadership positions. He also served on the board of trustees for the Britt David Day Care Center and was chairman of that committee for many years. Mr. Sinquefield was very active working in youth sports programs. He coached football in the Pop Warner Football and past Columbus Youth Football league programs for twenty six years. He coached Little League Baseball and served on the Board of Directors of Pioneer Little League for forty five years. He also served as league treasurer for thirty two years. Loy was honored by having a field named after him. He was also presented with the Golden Service to Youth Award. Loy was active in many community service and professional organizations. He was a lifetime member and past president of the Kiwanis Club of Greater Columbus. He was a past Lt. Governor for District 2 and served as chairman of many Georgia District Kiwanis International committees. He also served as chairman of a Kiwanis State Convention. He was a board member and past president of The Columbus Traffic Club. He was past President of the National Defense Transportation Association, Ft Benning/Tri-City Chapter. He was a past member of Americus, Opelika, and Columbus Chamber of Commerce. He was a past member of Existing Business Expansion, Industrial Development for the Columbus Chamber of Commerce. Loy Sinquefield was preceded in death by his parents, two brothers, Hoyt and Ray; three sisters, Glenda Sinquefield, Sarah Sinquefield and Helen Gladney. He is survived by his wife of fifty seven years, Rose Marie; three sons, Rusty (Stella), Mike (Beverly Robbins), Mark (Tammy); daughter Tracy Wilson (Jay); nine grandchildren, Amy Kennedy, Jan Ramirez (Corey), Alan Sinquefield (Jessica), Kelly Marth (Will), Kelsey Sinquefield, Nathan Sinquefield, Aaron Wilson (Keshia), Mary Beth Wilson, Madison Wilson, Summer Robbins, and Hunter Robbins; eight great grandchildren, Noah Kennedy, McKenzie Hale, C.J, Carson, Corbin and Camden Ramirez, Alan Jr. and Abby Sinquefield; one sister, Reba Gillis. Loy also leaves behind many loving extended family members and caring friends. Flowers will be accepted or those so desiring may make a memorial donation to the Britt David Baptist Church Transportation Fund.

To leave a condolence, you can first sign into Facebook or fill out the below form with your name and email. [fbl_login_button redirect="https://vancebrooksfuneralhome.net/obituary/loy-sinquefield/?modal=light-candle" hide_if_logged="" size="medium" type="login_with" show_face="true"]
×