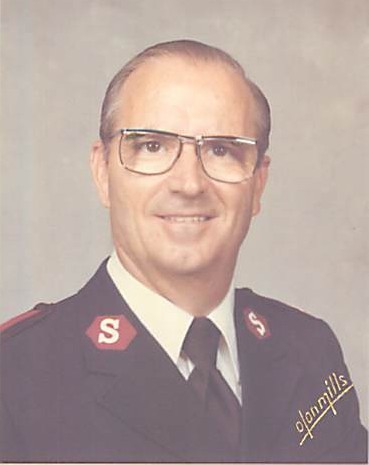 Serenaded by angels, Major Frank V. Gordon peacefully ascended to his ultimate reward from his home in Salem, AL on Sunday, April 23rd. Funeral services will be held at 2:00 pm EDT on Thursday, April 27, 2017 at Vance Memorial Chapel in Phenix City with COL Rodolph Lanier and LTC Jack T. Waters officiating. A private interment will follow at Lakeview Memory Gardens. The family will receive friends Wednesday evening from 6:00 to 8:00 pm EDT at the funeral home. Francis “Frank” Vicilli Gordon was born on December 16, 1932, in Charleston, SC to loving parents – Jesse Virginia Salvo Gordon and James Henderson Gordon, Sr. He was raised and received his early education in Charleston, along with his twin brother (Victor) and three other siblings (James Jr., Margaret and Jacqueline). As a youngster, Frank was drawn to the church by the sounds of music resonating through the neighborhood. He joined The Salvation Army and his love for “all things brass” grew. Initially planning a career in the US Armed Forces, he joined the United States Army and was commissioned as a Second Lieutenant during the Korean War. It was at this point in his life that he felt God’s calling to the ministry. He was honorably discharged and was accepted into The Salvation Army School for Officer’s Training in Atlanta, Georgia. Shortly after graduation from seminary in 1952, he met and married Betty Louise Barnett. Together they served God and The Salvation Army for over 42 years. In addition to attending US Army Officer Training at the Citadel and Fort Jackson, South Carolina – Major Frank Gordon received his Bachelor’s degree in Theology from American Bible College in Pineland, FL. In 1981, he was also appointed as a delegate to The International College for Officers in London, England. As a Salvation Army Officer, Frank Gordon served as a Youth Officer in Asheville, Concord and Charlotte, North Carolina, as well as in Spartanburg, SC. As a Corps Officer (Pastor) he was stationed in Aiken, South Carolina; Goldsboro, North Carolina and Tampa, Florida. The Gordons were City/Area Commanders in Tampa and Jacksonville, Florida; Oklahoma City, OK; Dallas, Texas; Atlanta, Georgia and Baltimore, MD. Serving as Divisional Youth Secretaries in Kentucky/Tennessee and Alabama/Louisiana/Mississippi Divisions in the late 1960’s and early 1970’s, they were then promoted to the rank of Major in God’s Army. They continued to serve the church as Divisional Secretary in the Alabama/Louisiana/Mississippi, National Capital and the Georgia Divisions. As General Secretaries, they accepted appointments in Dallas, Texas and Baltimore, MD. Following their official retirement in 1998, Frank continued to work diligently for God’s Kingdom by holding appointments as Interim Pastor as needed throughout the southeastern United States and also as a Capital Campaign Director with Waters, Pelton, Ostroff and Associates to raise funds and build new churches across the southern territory. Major Gordon served in a variety of civic organizations throughout his career. He was member of the Civitan Club, the Exchange Club and was a 35+ year active member of the Rotary Club – receiving the Paul Harris Fellowship Award from Oklahoma City, OK. He served as the Chaplain for the Civil Air Patrol in South Carolina and was an honored member of several Ministerial Associations throughout the South. He proudly served on the Chamber of Commerce in Tampa and Jacksonville, Florida; Oklahoma City, OK; Dallas, Texas and Baltimore, MD. He received the Order of Kentucky Colonels in Frankfort, KT; Leadership Award from the City of Baltimore; Committee of 100 Award from Tampa, FL and was a distinguished member of the National Civil Defense Directors Association. In the Masonic Order, he was a Life Member of the Blue Lodge, a Life Member of the Scottish Rite 32 and a Shriner. He considered all these accomplishments as a stepping stone to furthering God’s Kingdom. Frank “Pappy” Gordon joined his wife Louise at the gates of Heaven 7 weeks after her passing. They leave behind their loving children: Frank Jr. (Joan); Linda (Charles); Donna (Manuel); Fred (Lori) and Jonathan (Amanda). Their beloved grandchildren: Charles Fleitas II; Francis Fleitas; Victoria (Sam) Damaso; Rebekah (Ray) Marcum; Daniel Gordon; Joshua Fleitas; Jacqueline (Jake) Strickland; Caitlin Gordon; Andrew Gordon; Owen Jenkins; Elijah Jenkins. Most importantly they leave a legacy in their precious great-grandchildren: Kassidy and Riley Marcum; Abigail and Nicholas Damaso; Elena Lisette and Charles Fleitas III; Lucas Presley Howard. From the bottom of our hearts, the family would also like to thank Majors Frank and Louise Gordon’s trusted caregivers over the last few months of their lives on earth: Charles Jenkins, Deborah Scott of Southern Care Hospice and Tandy Finley, Patrina Hunt-Yarde and Amy Langford of Synergy Home Health. In lieu of flowers, the family would encourage friends and family to make a donation to The Salvation Army of Columbus, Georgia in Frank and Louise’s name.

Love and prayers to the family...Tex & Mona Ellis

To leave a condolence, you can first sign into Facebook or fill out the below form with your name and email. [fbl_login_button redirect="https://vancebrooksfuneralhome.net/obituary/major-frank-v-gordon-sr/?modal=light-candle" hide_if_logged="" size="medium" type="login_with" show_face="true"]
×