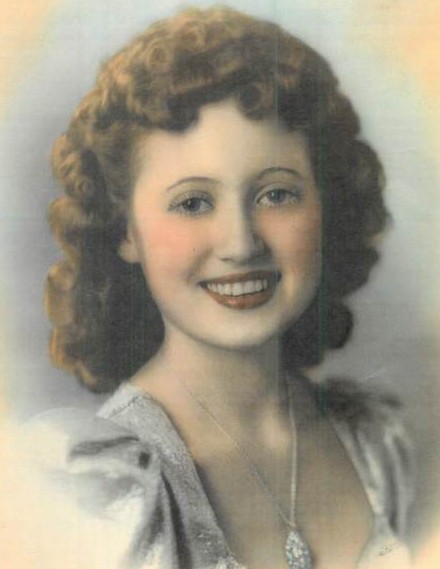 Mary Josephine Pacetty Lampp was born on June 14, 1921, at 1802 First Avenue in Columbus, Georgia, in the house built by her Willett ancestors around 1840.  Her father was Louis Augustus Pacetty, who was born in the same house, as was his mother.  Louis was a portrait photographer.  Mary’s mother was May Ledford Pacetty, born in Sweetwater, Tennessee.  Mary was the youngest of four children; her sisters were Evelyn, Armalie, and Kathryn. She grew up in Columbus and attended Holy Family Catholic Church and Saint Joseph’s Academy through the eighth grade, and graduated from Jordan Vocational High School in Columbus.  She married Larry LeRoy Lampp on December 18, 1941 in the rectory of Holy Family Church.

Mary’s six children and their spouses, her grandchildren, and her great- grandchildren together can make a great rowdy gathering.  We have often told Mama, “This is all your fault!”  She would reply with her sweet smile that she was proud of it.  Mary enjoyed big band music and dancing; she was a wonderful singer and won a singing contest in her youth singing “Danny Boy”.  Later on, her audience, as well as her life, was her family. She was quiet and shy, but had a very good, dry sense of humor.  She never craved adventure, and was always alarmed when one of her children ventured out on some activity that she considered dangerous; the word would go around that someone had bought a boat or planned a trip overseas or got a job as a lifeguard, and the news was always accompanied by the warning, “Don’t tell Mama!”  She loved to be at home, in Columbus.  Her favorite movie was “Gone With the Wind,” her favorite singer Bing Crosby. Watching and keeping up with movies was her favorite hobby.

Mary died peacefully in her sleep at age ninety-eight, proving everyone wrong about what is good for you to eat—she ate dessert first, and stayed healthy on grits, Hershey bars, and Coca Cola for the last years of her life.  Her faith was simple; she once said that her idea of what heaven would be like was to sit at the feet of Jesus and listen to Him telling His stories.  She was loved by many and will be greatly missed.

Her four score descendants survive her; these are her children and grand-children:

To leave a condolence, you can first sign into Facebook or fill out the below form with your name and email. [fbl_login_button redirect="https://vancebrooksfuneralhome.net/obituary/mary-josephine-lampp/?modal=light-candle" hide_if_logged="" size="medium" type="login_with" show_face="true"]
×