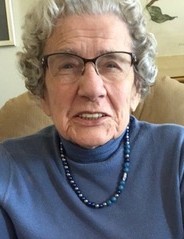 Mary Martha (Howard) Phillips, born on April 4, 1924 in Columbus, Georgia, to Katherine Margaret Lind and Walter Murphy Howard, passed away at age 94 on June 18, 2018 in Concord, New Hampshire. She graduated from Huntingdon College in 1945. Mary Martha was the beloved wife of the late Jackson Robert Edward Phillips. She is survived by her daughters, Tenley Callaghan and Pamela Malcolm; her sons-in-law Peter Callaghan and Alton Malcolm; and her grandchildren, Jackson Callaghan, Parker Callaghan, Kate Callaghan, and Amari Malcolm. Known to her friends and family as full of warmth and humility, Mary Martha was a progressive thinker and very liberal in her beliefs. She was a kind and generous supporter of social causes and programs to help those in need.  Mary Martha became a Northeasterner, living in New York City after World War II, moving to New Jersey to raise her family, and spending the last 15 years in New Hampshire at Havenwood Heritage Heights, where she made new friends and became a part of the community.  Mary Martha never lost her Southern charm and she instilled a deep sense of Southern hospitality in her children. Mary Martha loved to travel, especially with her children and grandchildren. She took memorable trips to Alaska and Amsterdam with her daughter Pam, Italy and Spain with her grandson Jack, Ireland with her grandsons Jack and Parker, and numerous trips to New York City with Tenley and Kate. She loved watching her grandchildren, and was a regular at their football, baseball, and basketball games, ski races, cheering competitions, concerts and special school events.  No one was more proud of her four grandchildren than Mary Martha.  Mary Martha also loved a good party, and took great joy holding court, delighting old and new friends with her sparking personality.  Special thanks to the wonderful staff at Havenwood, who loved and cared for her every day. Friends and family members may attend the graveside service on Saturday, June 23 at 10:00 a.m. at Riverdale Cemetery, Columbus, Georgia.

To leave a condolence, you can first sign into Facebook or fill out the below form with your name and email. [fbl_login_button redirect="https://vancebrooksfuneralhome.net/obituary/mary-martha-howard-phillips/?modal=light-candle" hide_if_logged="" size="medium" type="login_with" show_face="true"]
×