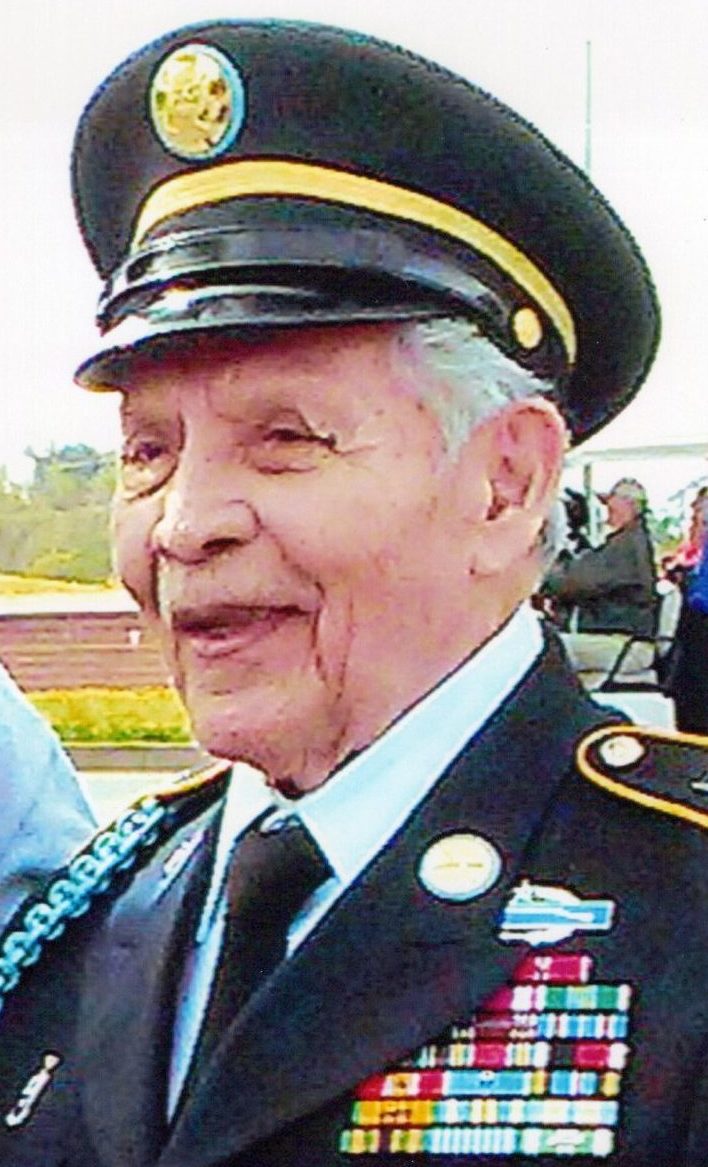 MSG (Ret.) Jose “Joe” P. Diaz passed away Sunday, February 7th, 2021 at the age of 94 at Brookside Glen in Columbus, Georgia where he was loved by surviving family members as well as all of the wonderful staff at Brookside Glen who took care of him every day for the past few years. MSG Diaz suffered from dementia and most recently acquired COVID as well as pneumonia which he never recovered from.

MSG Diaz was born in Tilden, Texas on April 18, 1926 to Roberto Diaz and Ma. Del Jesus Moya-Diaz. Before his high school graduation, he joined the United States Army on his 18th birthday and was shipped over to France. During WWII, he fought through France, the Netherlands, Belgium and Luxembourg and ended up in Germany in the Ardennes-Alsace Campaign of the Battle of the Bulge in 1945. He was the eldest of nine brothers and sisters, which a few of his sisters are still living. He was a devout Roman Catholic and a member of Holy Family Catholic Church in Columbus. He was also a member of the VFW in Columbus.

MSG Diaz attended Laredo High School in Laredo, Texas and worked in his father’s “Phillip 66” gas station before enlisting in the United States Army. He later acquired his B.A. degree at Troy State University in Business Administration and majored in Political Science.

During his military career, MSG Diaz served in WWII, Korea and Vietnam as well as two other overseas duty assignments including three years in Uruguay, Montevideo and two years in Riyadh, Saudi Arabia besides a year at Ft. Buchannan, Puerto Rico. MSG Diaz was awarded two Bronze Stars and seven Good Conduct medals as well as many other prestigious medals and honors.

Following his military career MSG Diaz wore his army uniform for another 17 years teaching ROTC for the Muscogee County School District mainly at Kendrick High School and Shaw High School, as well as Columbus High School where he received an award from the United States Army for having more Cadets selected to the West Point Military Academy than any ROTC Instructor in the United States. While teaching he cared deeply for his students and was a source of brightness. When he taught, he was very informative and attentive, whereas he made everyone feel unique. He was loved by thousands of students as well as their parents. After retiring as a ROTC Instructor, Diaz acquired a contractor’s license and like most Hispanics, he began building houses, first his own then helping his daughter build her house. Family stated, he was always busy and always found someone to help.

MSG Diaz is survived by three of his children and was married to Dorothy Louise Diaz for 41 years until her death July 10th, 1988. They had four children, Robert F. Diaz (deceased 2014) of Palm Harbor, FL, Daniel E. Diaz of Phenix City, AL, Maj. (Ret.) Richard P. Diaz and his wife, JoJo of Enterprise, AL and Diana L. Diaz-Arrington of Anchorage, AK. MSG Diaz is also survived by 22 grandchildren, 20 great-grandchildren and two great-great-grandchildren.

As we celebrate the life of our father, grandfather, great-grandfather and great-great-grandfather, husband and brother, we can proudly say he captured the essence of everyone’s life whom he met and therefore, he will be missed and loved by thousands upon thousands of friends, former students and parents within the Columbus, Georgia community, as well as family and relative all around the globe including Alaska, Germany, Costa Rica, Uruguay, Brazil and Switzerland.

A funeral service will be held at Vance Brooks Funeral Home, 4048 Macon Road, Columbus, GA on Wednesday, February 17, 2021 beginning at 10:00 am with Father Daniel O’Connell officiating. The private interment will conclude. The family will receive friends Wednesday, February 17, 2021 at Vance Brooks Funeral Home from 9:00 am until 10:00 am, one hour prior to the service.

To leave a condolence, you can first sign into Facebook or fill out the below form with your name and email. [fbl_login_button redirect="https://vancebrooksfuneralhome.net/obituary/msg-ret-jose-p-diaz/?modal=light-candle" hide_if_logged="" size="medium" type="login_with" show_face="true"]
×