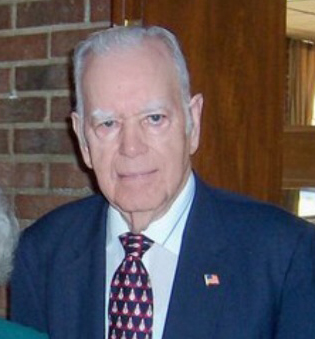 He grew up on a cotton farm near Serles, TN, in a family of gospel musicians and loved music, singing with a wonderful Bass voice. His father and brothers formed the Richerson Quartet when he was a youth, and he and his brothers were on a local radio show in Jackson, TN when he was a young adult.

Claude served in the US Army during WWII and was injured in the Battle of the Bulge, earning him a Purple Heart. After the war he graduated from Jackson (TN) High School, and entered the gospel ministry as a preacher. He married while in college and graduated from Union University with a BA, and the Southern Baptist Theological Seminary in Louisville, KY, where he earned a Master of Divinity degree.

His pastoral ministry spanned over fifty years of serving churches in Tennessee, Indiana, Kentucky, Virginia, and Georgia, where he retired at Southside Baptist Church in Columbus. After retirement, he continued to serve as an interim pastor, taught Sunday School, and led services at two nursing homes in Columbus for more than a decade.

A celebration of life service will be held at the Vance Brooks Funeral Home, 4048 Macon Road, Columbus, GA, Thursday, March 2, 2017, at 2 PM with burial to follow at the Park Hill Cemetery. Visitation will be at the funeral home one hour before the service.  Reverend Jim Morgan and Doctor Stephen Richerson will be officiating.  Those so desiring to extend condolences may visit www.vancebrooksfuneralhome.net.

To leave a condolence, you can first sign into Facebook or fill out the below form with your name and email. [fbl_login_button redirect="https://vancebrooksfuneralhome.net/obituary/rev-claude-b-richerson/?modal=light-candle" hide_if_logged="" size="medium" type="login_with" show_face="true"]
×