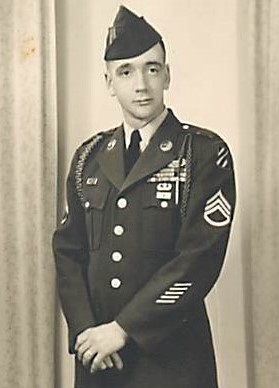 A Graveside service will be held 2:00 pm Tuesday, March 14, 2017 at Ft. Mitchell National Cemetery with full military honors.  The family will receive friends Tuesday from 12:00 until 1:30 before the service at Vance Memorial Chapel.

SFC Saint was born March 17, 1930 in Taylor County, GA to the late Henry Gordon Saint and Hattie Lindsey Saint.  At the age of 15 he enlisted in the U. S. Army in February of 1946 and retired in October of 1967.  While in the service he was stationed in Japan, Korea, Germany and Vietnam.  He was in the Light Infantry, Airborne Infantry and Armed Infantry.  He served as a rifleman, long range reconnaissance patrol, scout, section leader and rifle platoon Sargent.  He was most proud of the 7 years he served in the 3rd Infantry Division.  He was also proud of his service in the Korean War during the Battle of the Chosin Reservoir.  After retiring from the military, he also retired from Beals Lighting and Decorating Center with 20 years of service.

Other than his parents and wife, he was preceded in death by a son, Donald Lee Saint and a daughter, Sandra Lee Saint.

SFC Saint did want to say goodbye to his friends at the Hwy 280 Waffle House in Phenix City, AL.

Online condolences may be made at vancememorialchape.net

To leave a condolence, you can first sign into Facebook or fill out the below form with your name and email. [fbl_login_button redirect="https://vancebrooksfuneralhome.net/obituary/sfc-ret-gordon-lee-saint/?modal=light-candle" hide_if_logged="" size="medium" type="login_with" show_face="true"]
×