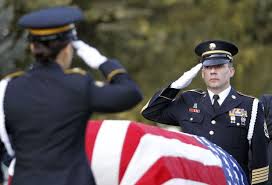 A graveside service will be 11:00am Friday, March 16, 2018 at Ft. Mitchell National Cemetery with a procession leaving Vance Memorial Chapel at 10:30.

Mr. Davis was born July 27, 1927 in Plumer, PA to the late William Edward Davis and Loretta Hutchinson Davis. SGT Davis joined the US Army at an early age. So young that he was discharged and allowed to reenlist when he was of proper age. This didn’t lessen his desire to serve his country. He retired after 27 years of service, 23 on record. He served in WWII to include landing on Omaha Beach on the second wave in Normandy and participating in the Battle of the Bulge and a lot in between. Served in Korea and was at Heart Break Ridge. He also served in Vietnam to include being on the front lines twice. A man of honor serving and protecting our country and freedom we enjoy to this day.

He carried the bible with him while in the service and gave God all the glory for bringing him home without harm. He was a dedicated, loving and amazing husband, Dad, Grandpa, Great Grandpa, Paw, Paw and friend to all. Loved by all and disliked by no one. A great man with exemplary values and character to be cherished and followed by all. He impacted so many lives of family and friends. He will be missed immensely and remembered often as our beloved family member, friend and HERO!

Other than his parents, he was preceded in death by his wife Anna Davis and several siblings. Robert Clayton “Mike” Davis, Alice Hankey, Betty “Sis” McCauley, Roger “Podge” Davis of Oil City. Pa.

To leave a condolence, you can first sign into Facebook or fill out the below form with your name and email. [fbl_login_button redirect="https://vancebrooksfuneralhome.net/obituary/sgtret-arthur-edward-davis/?modal=light-candle" hide_if_logged="" size="medium" type="login_with" show_face="true"]
×